As a young being develops – in this case a little human – physical and mental functions are switched on at an appropriate age. This allows for the development of the ‘big brained’ biped that we are. Knowing when these functions are lighting up can greatly benefit the growing individual – if the function in question is then ‘exercised’ and made to be strong and stable. This can be mind or body or both, deeper biology does not separate them.

Between 6 and 13 months old, a baby human will crawl. Between 9 and 12 months, they will pull themselves up, and then between 8 and 18 months old, they will walk for the first time. What is less well known, is that there are many other functions that turn on as we mature. If we are not in an environment that stimulates these switches to turn on, then they may malfunction or do not turn on at all. Sometimes the negative result can only be seen in later life.

In times gone by, children would play vigorously, sometimes even dangerously. Their free play environment was wide ranging and offered all kinds of learning opportunities that stimulated the brain and body functions. As the world has populated, polluted, and become more dangerous – perceived or in reality – children are not playing in the same capacity as before. Even parents who are conscious of the modern problem, do not realise how little of the correct type of stimulation the children of today are being exposed to. With that said, the modern child is now being exposed to electronic devices that are distorting development and causing more harm than good.

The Warrior Heart Child Development Program creates an environment where kids ‘play’ at their physical and mental limits. This constructed environment, combined with the teachers, serves to ‘push’ the kids along, so to speak. This is a kind – and yet scientific way – of recreating natures pressures and requirements for a healthy development.

Our program carefully follows natural human development. When children are aged from 5 to 9 years old, they mostly learn and practice acrobatic movements found in the art of stealth (kids love ninja stuff). They also learn martial art basics, like kicks, strikes, throws, etc., but the emphasis is on getting the body to function above and beyond their non practicing counterparts. We also avoid too much discussion of ‘combat’ or ‘fighting’ as kids are kids, and will try things out. 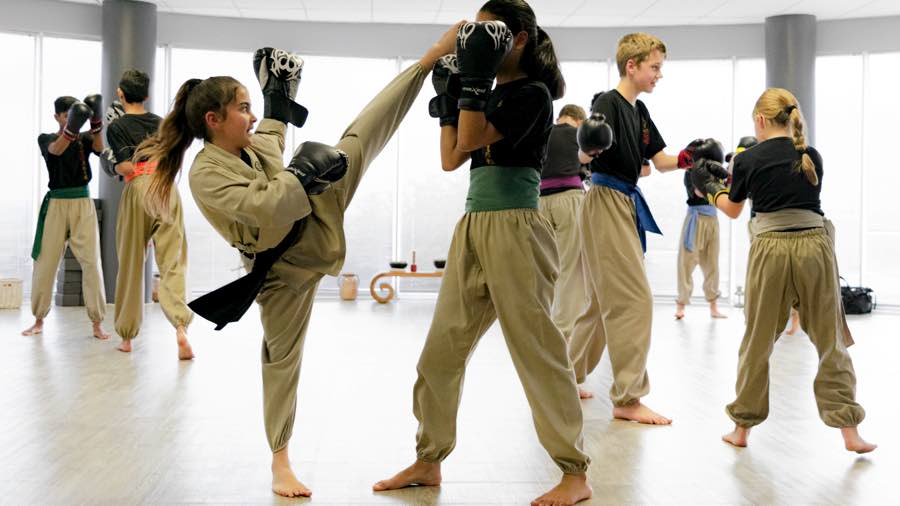 As the youngsters start their teenage years, we train them hard in combat arts. We start adding weapons skills to those who have been assessed to be ready for them. Normally its cool stuff like swords and staves. Training weapons are made of wood, and again – as always – each step is a progression, that develops the skill, the body, and the mind, safely.

By 14 years old, or thereabouts, teens train with the adults and are ‘brought into the community at large’. We nurture them in a fun, banter filled environment – one that teaches them to not take themselves so seriously.

A fully developed, trained exponent of our school, will be well trained in warrior arts, disciplined in mind and body, and polite and kind in nature. This is our way. The school motto is: “Strong in hand, kind in heart”.

Below, is a short video with Onyx and Madison ages 11 and 12 respectively. They are both well developed and experienced for their age.